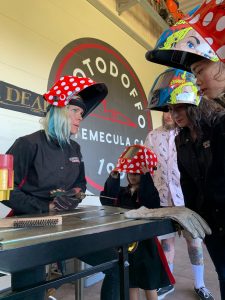 s more than just a TV star and an off-road racing fanatic. Her accidental death on August 27, 2019, cut short a life of creativity, ambition, dedication, and inspiration to many. Her career spanned a wide range from fabrication & metal artistry to racing to the entertainment industry. In the process Jessi became a hero and guide to many women looking to break out of gender-defined roles and discover their unique gifts and talents in traditionally male strongholds such as welding and motorsports.

Jessi Combs was born in South Dakota, where she participated in all forms of outdoor sports. Later, she attended the automotive fabrication training program at Wyoming Tech, which eventually led to her first TV gig on Overhaulin’.

In addition to that show, Jessi was known for her roles on Xtreme 4X4, All Girls Garage, The List: 1,000 Car Things To Do Before You Die, and filling in as a host and builder for Season 7 of Mythbusters.

In 2015, Jessi co-founded The Real Deal Revolution, a non-profit dedicated to revolutionizing the perception of skilled trades – and women’s roles in them. The Real Deal is a dynamic collaborative of automotive and industrial women who empower and educate others by teaching the skilled trades through hands-on welding workshops, events, and adventures.

In addition to metalworking in her own custom fabrication shop, Jessi’s creativity found other outlets, including leather craft and photography. She also wrote a children’s book Joey and the Chopper Boys, to inspire girls to expand their horizons.

Jessi’s fame and experience in metal fabrication led to many sponsorship roles. IMS was proud to partner with Jessi Combs as her go-to metal supplier, providing her with tools and resources for her off-road racing projects. She was also a spokesperson for the American Welding Society (AWS) from 2008 to 2013. Beginning in 2008, Jessi acted as a spokesperson for Lincoln Electric and helped develop its line of women’s protective welding gear.

But racing was her first love. Jessi entered and placed in some of the most grueling, multi-day off-road races, proving her mettle right along with the men. In 2011, she placed 2nd in Class 10 of the Baja 1000, considered the toughest race of its kind. Then in 2014, she became the first woman to place in King of the Hammers, the most brutal one-day desert race in the world. She was able to complete the entire Ultra4X4 season and won the national championship [spec class].

Jessi continued her winning spree in 2015 with a 1st Place in the First Participation category (10th Place overall) in the 9-day Rallye Aicha des Gazelles, an all-woman race through the Moroccan Sahara using only a compass and hand-drawn maps. In that same year, Jessi was part of an all-female driving team that took a 2nd-place Class 7 finish in the Baja 1000.

Jessi was invited to be one of the drivers of the North American Eagle Supersonic Speed Challenger, a jet fighter remade into the fastest land racing machine in history. In 2013, Jessi drove the Eagle at a record 398 mph with a top speed of 440 mph, becoming the fastest woman on four wheels. Again in 2018, the team achieved a new top speed of 483.227 mph with Jessi in the driver’s seat.Then tragedy struck. Thirty-nine-year-old Jessi was attempting to break her own record when the Eagle came apart and crashed in the Alvord Desert in Oregon.

A private memorial for family and friends celebrating the extraordinary life of Jessi Combs was held September 21, 2019, at the Petersen Automotive Museum in Los Angeles. A public exhibition to honor the "Fastest Woman on Four Wheels" followed immediately after. Any donations go to the Jessi Combs Foundation, with its mission statement: To Educate, Inspire and Empower the next generation of female trailblazers and stereotype-breakers.

Industrial Metal Supply and Jessi Combs were marketing partners for many years. Her diverse skills and determined desire to be among the best led to a mission of quality in everything she conquered.

Jessi Combs – We salute you!

Next Post: Making A BBQ Grill from Scrap Metal